Do you have a question?

Here’s an outline of the history of our company, RINN XI.

The history of RINN XI.

In 1899, Wilhelm Rinn III. and Karl Volkmann I. started operating a carpentry with a saw mill. They started sawing and chopping tree trunks into square timber and beams by hand in the Hagwiesen. After just a short time, they got a steam engine and timber circular saw. Carpentry work was done in Heuchelheim and the local area.

Business was disrupted during the First World War and was then continued after the war had ended by Wilhelm Rinn III. The timber yard was now in Friedrichstraße.

After the death of Wilhelm Rinn III. in 1928, his son, Wilhelm Rinn XI., took over the company and moved to the Feldstraße in 1935. During the course of this relocation, a new log saw frame and new wood processing machines were installed. Staff numbers then started to increase, from 4 to 5 journeymen.

Business almost came to a standstill during the Second World War. However, the factory equipment was still in place and was used again immediately after the war had ended, as lots of repair work was required due to bomb damage. Staff numbers quickly increased from 10 to 15 employees, because of repatriates and people displaced by war.

The three sons of Wilhelm Rinn XI. – Karl, Heinrich and Ernst – entered the family business as partners in 1945. However, after training to be an architect, Ernst Rinn left in 1955. 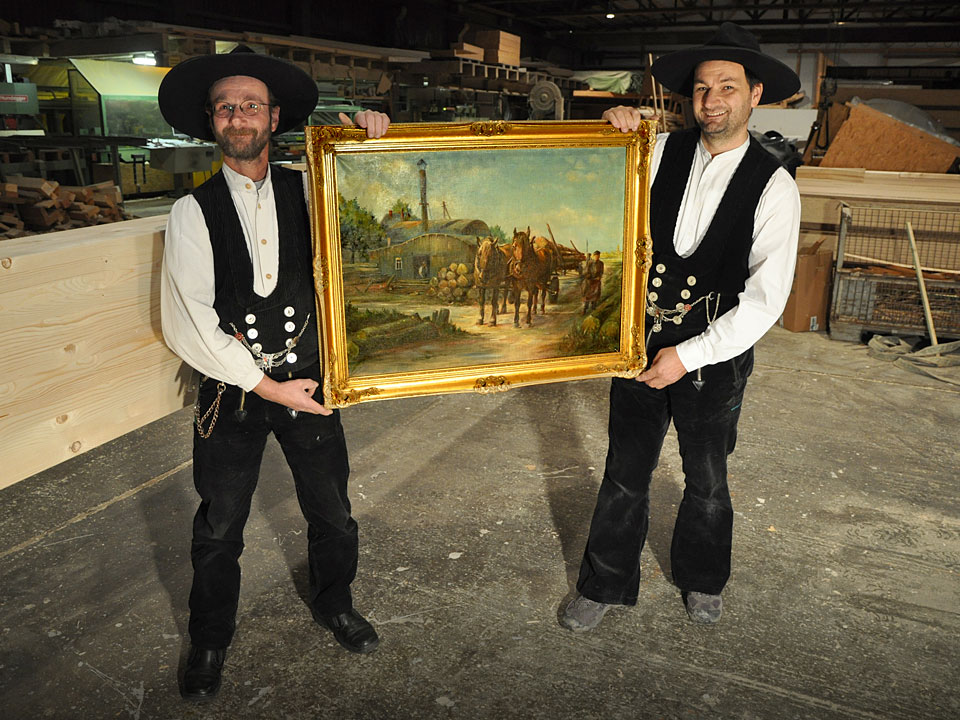 Jürgen and Christopher Rinn with a painting of the carpentry in 1949.

The carpentry’s 50 years of existence was celebrated in 1949. Even then, it still employed staff from the time of the First World War. There were now around 20 employees.

The positive development now continued. In addition to traditional carpentry work and prefabricated wood products, engineered wooden structures were also made. The company was involved in lots of interesting building projects, such as football stadia and motorway bridges, throughout central Germany between Mannheim and Göttingen and in West Berlin.

After Wilhelm Rinn XI. left in 1960 due to incapacity to work, Karl and Heinrich Rinn took over managing the company.

The timber mill, which was regenerated in 1970 as well as the 1200 sqm assembly hall and the company’s own construction office allowed rational execution of timber construction work.

Karl Rinn died in 1979 and Heinrich Wilhelm Rinn took over the sole management of the company.

The initially high demand for carpentry and timber constructions waned in the 60s and 70s because of a preference for concrete and masonry constructions. The company remained unaffected by the economy because it was not specialised and instead did everything from the smallest hut to large construction sites e.g. motorway bridge construction.

In 1992, Heinrich Rinn transferred the company management to his sons, Jürgen and Christopher Rinn. The company is now managed as a fourth generation family firm.

The modernisation of the company and its adaptation to technological requirements made further growth and establishment on the market possible. A CNC controlled assembly plant was installed in 1991 and 1999. Several CAD jobs then followed.

Even the store fire in 1996 could not halt the steady growth of the company. The fire resulted in around 2 million German Marks of damage.

Between 1996 and 1996, the unique revolving house “DrehHaus” was built as a unified, ecological and energy optimised home concept.

In 1999, the company celebrated its 100 year anniversary. By this point, there were 33 employees and the company was able to train 3 apprentices per year.